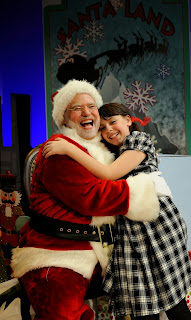 By Richard Pacheco
The musical version of “Miracle on 34th Street” currently at the Ocean State Theatre is sheer family fun and a nostalgic delight, sparked by solid performances an fun staging. Based on the ever popular 1947 film, the book music and lyrics are by Meredith Wilson who also wrote “The Music Man” and “The Unsinkable Molly Brown.” This was his third Broadway musical production, directed by Stuart Ostrow and choreographed by Michael Kidd, opened on October 3, 1963 at the Shubert Theatre, and closed on July 25, 1964 after 334 performances and 2 previews. The cast included Laurence Naismith, Janis Paige, Craig Stevens, Lisa Kirk, Fred Gwynne, Michael Bennett, and Baayork Lee. The original director, Norman Jewison, was replaced by Ostrow, the producer, during rehearsals. Originally the musical was called “Here’s Love,” not “Miracle on 34th Street.” It’s not as good as Wilson’s other musicals, but certainly is pleasant and fun festive entertainment that will prove to be fun for the entire family, full of holiday sentiments and nostalgia.
Adapting the film for stage created several problems, but this charming cast makes them less noticeable.
Susan Walker and her mother, Doris, live alone in New York in the 1960s. Doris works in an   Her Santa Claus ends up drunk and she encounters Kris Kringle and convinces him to be the store’s Santa. He is an absolute delight charming everyone he meets and leaving an impact on store and its employees. Susan meets an ex-marine named Fred Gaily, who takes it upon himself to rid her of her "realistic" outlook on life by taking her to see Santa Claus at Macy's. Kris (Santa) manages to win Susan over while attraction blooms between Fred and Doris. When Kris takes a mental test, the tester despises him and files for a civil commitment, claiming to be assaulted. The first act ends with Kris being arrested and taken into custody. The second act sees Kris appearing in the New York Supreme Court, with Fred helping him defend his sanity. In the conclusion, Fred uses the Post Office to prove to the court (and the world) that Santa Claus does exist: Kris Kringle is he. 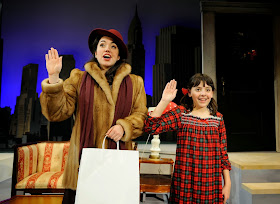 executive position at Macy's and, at the start of the musical, is busy organizing the Macy's Thanksgiving Day Parade.

Richard Koons is Kris Kringle, yes, Santa Claus. Santa has lost his faith in the modern world and struggles to regain it and his place in the world. Koons is sheer fun, robust and jolly in the role. He charms and enchants with flair and zest. He is pure delight, with a strong singing voice and terrific stage presence. The song he does with Fred and the ensemble, “Here’s Love” is delightful fun.
Brigid Fitzgerald is charming as young Susan, a devout non-believer in Santa Claus or anything she cannot see, touch, taste, etc. due to her mother’s disenchantment with her father, with love, life and everything. She is pert and perky, convincing as skeptic and just as convincing in her transformation into believer at the hands of Kris Kringle and Fred, who likewise enchants her. Her duet with her mother is a delight.  She also shines in her duet with Fred, “My Wish” and her duet with Kris, the reprise of “Pie Cones and Holly Berries.”
Megan Wheeler is Doris, Susan’s mother a woman disappointed in love and she feels life, making her a skeptic and somewhat cynical which she passes on to her daughter continually, only believe what you can see or touch, not in imagination or anything like it. Wheeler is excellent in the role, full of zest, a woman with power at work and afraid to be vulnerable in her personal life, to surrender that kind of control she maintains at work. She is deftly convincing conveying both aspects of her personality, both in control and vulnerable. She shows her voice off to good effect in songs like her duet with Susan and “You Don’t Know.” She shines again with the reprise of “Look Little Girl.”
Jeffery Funaro is recently retired marine, turned attorney Fred Gaily. He is a man who is sentimental and nostalgic in many ways.  Funaro is charming in the role, easy going and friendly, very appealing. He is excellent in his duet with Susan, “My Wish” and later in his solo, “Look Little Girl.”
Matt Dasilva is Doris’ assistant, Shellhammer,  a man quick to try and endear himself to his superiors no matter what it takes. He will alter course at the slightest provocation, providing that comes from one of his bosses, he will do it in a flash. Desilva is enjoyable in the role, full of energy and determination as Shellhammer.
Mark S. Cartier is R. H. Macy, a savvy and hard headed no nonsense businessman who owns Macy’s and is willing to do what it takes to put his store on top and keep it there—even if it means making friends with Gimble’s. He shines with Doris, Shellhammer, Tammany and Judge Group in “My State.”
Daniel Larson is Judge Group who is sitting on the controversial hearing about Kris Kringle, caught between a rock and a hard place, forced to not only judge on whether Kris is sane, but whether there is a Santa Claus. He is funny when he tries to squirm to get out of his tight spot and save himself and his future election as judge by deciding on whether there is a real Santa Claus. 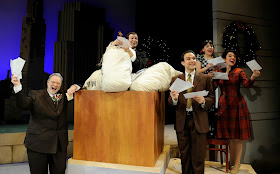 It’s a large and energetic cast, filled with both children and adults having a merry ole time. There are many ensemble numbers that are loads of fun like “The Big Ca-lown Balloons” at the beginning and “That Man Over There” at the end in both the courtroom scene with Macy and its reprise.  The dancing was effective and fun, but nothing spectacular.
It is ironic that the most memorable song, “It’s Beginning to Look a Lot Like Christmas,” is not even listed in the program considering it has become a holiday standard. It is sung in counterpoint to "Pinecones and Holly Berries." In the second act there is a song that is a direct steal from the “Music Man’ score “She Hadda Go Back” which sounds a lot like “Ya Got Trouble” from “Music Man.”
Director and choreographer Barbara Hartwig delivers a charming production, full of fun and finesse, loaded with nostalgia and seasonal cheer. Her choreography is vivid and effective, but not stunning.

Musical director Esther Zabinski is right on the mark with her orchestra and what she gets out of her singers, despite a mostly lack luster not memorable score like Wilson’s other musicals like “Music Man”.
Set designer Lisa Pegnato delivers a multifaceted set with some bold, effective touches that work transforming the stage from the parade route to a courtroom, and some apartments with nice touches.
While the musical is not as memorable as Wilson’s others, it is sheer holiday fun for the whole family, entertaining and pleasant, sure to evoke warm holiday thoughts and feelings all around, in generous abundance.
Richard Pacheco at 1:25 PM
Share