“Vanya and Sonia and Masha and Spike” at Trinity Rep


by Richard Pacheco
Trinity Rep’s New England Premiere of Christopher Durang’s “Vanya and Sonia and Masha and Spike” is hilarious fun, loaded with references to Chekhov and some raucous belly laughs, fun galore for all in an excellent production that sparkles with vivid acting a lavish set and keen direction. 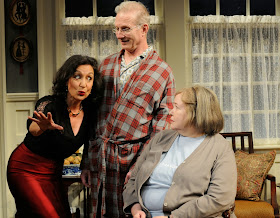 “Vanya and Sonia and Masha and Spike” is a comedy by Christopher Durang. The play ran Off-Broadway in 2012 and then transferred to Broadway in 2013. The play won the 2013 Tony Award for Best Play, 2013 New York Drama Critics' Circle Award for Best Play, 2013 Drama League Award for Outstanding Production of a Broadway or Off-Broadway Play, 2013 Drama Desk Award for Outstanding Play and Off Broadway Alliance Award for Best New Play. Several of the play's characters are named for the characters in plays by Anton Chekhov, and the play's setting in a cherry orchard and the possible loss of the family home are also from Chekhov works. It was commissioned by the McCarter Theatre, Princeton, New Jersey in association with the Lincoln Center Theater.
The characters or the main ones at least are named after characters from Chekhov’s plays because the two parents were professors who “dabbled in community theater.” Even the theme of possibly losing the family home comes from the Russian playwright. They live in the family home in Bucks County, Pennsylvania. Vanya and Sonia have not had to grow up. They live in the house they were raised in and have inherited, after spending their adulthood looking after their now-dead parents. Masha the now fading actress has provided the money for them to live and keep up the house   , including giving them a monthly stipend to live. Vanya is gay, Sonia constantly reminders everyone that she is adopted and Masha refuses to accept her acting career is taking another direction from leading ladies to grandmother roles despite everything she can don including taking a younger lover after her five marriages have failed.


Vanya and Sonia sit around trapped in stasis particularly since their parents died and complain like the Chekhov characters, lamenting their place in life. Things get stirred up when Masha returns to the house for a costume party with her young actor lover. Masha is an endless litany of insecurities and often self created drama. Spike, her lover is as handsome as them come and as dumb. He is more of an aspiring actor than actor with his biggest near miss being missing a role, despite a call back for a new series, “Entourage II.” Masha insists that all those going with her to the costume party reflect aspects of her Disney versions of Snow White. Sonia rebels and decides to take her own path. It all goes to hell with repercussions the morning after the party.
Brian McEleney is Vanya, who has never lived as a adult and finds deep within himself stirring and yearnings for other, better things. McEleney is a comic treasure as the laid back Vanya, who can evoke laughter from the simplest comment or gesture. Some of the quiet moments between him and Duclos are downright riotous with impeccable comic timing and confident finesse. 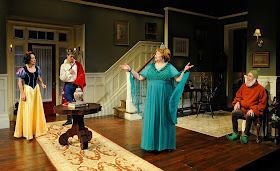 Janice Duclos is Sonia, the woman who perpetually reminds everyone that she is an orphan and they she took care of their parents in their Alzheimer tinged ends. Duclos is hilarious and the wallflower with moping misery and insecurity at having never really lived beyond the house. Her shifts between the manic and the nearly catatonic are masterful and side-splitting.
Phyllis Kay is Masha a twisted concoction of insecurities if ever there was one and consummate drama queen. When there is a way to lament something occurring, Masha finds it and plays it for all it’s worth. Kay is sheer delight as the crunched insecurities erupt with at times random provocation and always to a heated boil that is always hilarious and amusing. 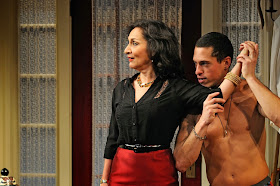 Mark Larson is Spike, a young, good looking, totally dumb and self-absorbed actor and Masha’s lover. Larson is excellent as the aspiring actor with more pectorals than brains. He struts about with wild abandon and outrageous exaggeration to great effect. Larson is a comic pleasure as the egomaniacal wannabe actor with more body than brains.
Tanela Large is the housekeeper, Cassandra, who, like the Cassandra of Greek mythology is blessed with the gift of prophecy and likewise the curse of having no on believe whatever she says no matter how accurate. Her prophetic rantings and dabbling with voodoo are riotous. Her gestures and gyrations when dealing with each new prophecy are uproarious.
Sylvia Kates is Nina, the young aspiring actress from next door, visiting her aunt and uncle whom Spike meets on the beach and invites to the costume party. She is sweet an innocent if somewhat dippy and a bit of a flower child type. Kates is delicious in the role, making the most of innocence and naiveté with style and conviction that is appealing and enticigin.
Director Curt Columbus delivers a solid, keenly directed set of performances from his cast. He shows real finesse with the often absurd humor and also with some touching moments, making them all fit seamlessly together. It is a wonderful production, full of spirit, style and flippant comedy that always hits the mark. 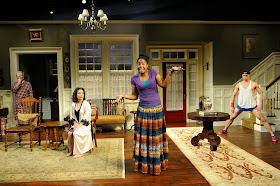 The set design by Michael McGarty is magnificent, rich in details and giving a sense of vastness and opulence, truly evoking a lavish country house.
It will be presented again at Trinity Rep until Dec. 22. For tickets, call the box office at 401-351-4242, or go to the website at http://www.trinityrep.com